We’re excited to embark on this new chapter together!

Sygnis SA has acquired a majority stake in Zmorph SA. The Sygnis Group is hereby formed, with Zmorph SA remaining a separate subsidiary. The acquisition was formally finalized on July 29, 2022. 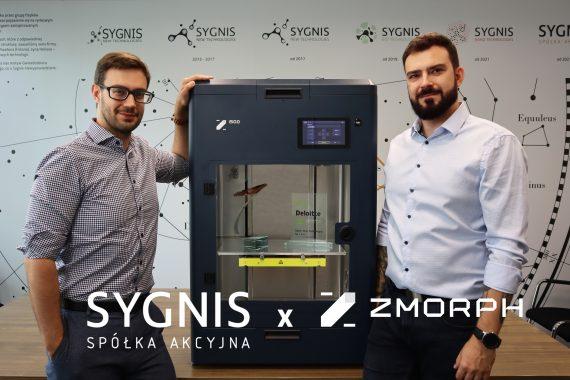 As an experienced Commercial Director, Grzegorz Kaszynski, at Zmorph SA, will focus on expanding the sales network and strengthening relationships with customers.

As head of the Technology and R&D Department of the Sygnis Group, Andrzej Burgs will provide Zmorph SA with seamless support for both the development of existing equipment and future joint products.

In its strategy, Sygnis planned to create the Sygnis Group, which will include, among others, a company that is a manufacturer of 3D printing machines. Initial assumptions about the implementation of strategy included a lead time of 2 years.

At this point, the opportunity to acquire Zmorph causes us to achieve this strategic goal right now. The effect of this synergy will most likely be visible by the end of this year, forming an important part of the company’s strategy.

The products developed at Sygnis may become an important element in the further development of the newly acquired company and may be transferred to Zmorph in the future.

In addition, thanks to the new location in Lower Silesia, we can expand our recruitment field by starting cooperation with various talented people in the region.

By investing in Zmorph as the Sygnis Group, we become the largest 3D printing entity in Poland, and our aspirations, of course, go even further.

I am very proud that we were able to add Zmorph to the Sygnis Group. It is one of the most important brands in the Polish 3D printing market and, above all, very recognizable worldwide.

Zmorph’s unique design and emphasis on quality, combined with Sygnis R&D strength, will certainly, quickly result in new solutions for the company’s offerings.

We are joining at a pivotal moment, with the i500 printer Zmorph becoming an important player in the professional 3D printer market, especially those targeted at professional SMEs.

We have diagnosed sales areas that have untapped potential. We aim to make Zmorph synonymous with a premium European brand for 3D printing.

Thanks to the combined expertise of both our company’s sales and R&D teams — we look forward to further developing the Zmorph 3D printer line into a state-of-the-art technology designed for the future!

The Zmorph Filaments Are Here

Your email address will not be published.