Over the last decade or so, the rapid prototyping industry has grown by leaps and bounds.

The major reason for this growth has been the introduction of high-quality 3D printers. 3D printers have drastically reduced the prototyping time, improved the quality of prototypes, and even resulted in huge cost savings.

The numbers speak for themselves: the rapid prototyping market has registered a constant year-on-year growth of 27% since 2015 and is expected to be worth $2.6 billion by 2025.

In this article, we will discuss the top features, use cases, and industrial applications of 3D printers for rapid prototyping.

Why use 3D printers for rapid prototyping?

The term rapid prototyping originates from the period before the invention of 3D printing when engineers were desperately searching for a solution to rapidly manufacture prototypes.

In fact, Charles Hull, the father of 3D printing, invented Stereolithography (SLA) technology to speed up prototyping manufacturing. Before 3D printing, there was no ‘rapid’ in rapid prototyping.

Prior to 3D printing, prototype production used to outsource to specialised businesses that used subtractive technologies or casting processes. The process took weeks or even months to build a prototype. It was quite costly as the prototypes also required tooling and associated logistics. Companies made prototypes from all kinds of materials, including wood and paper. 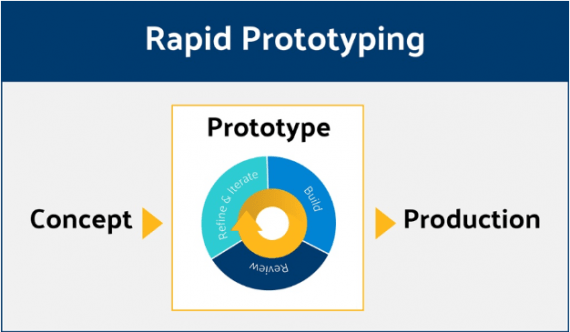 3D printers changed everything. Today, with the help of a 3D printer, manufacturers can make prototypes at will in their own factories or even in corporate offices.

As 3D printing eliminates tooling, 3D printed prototypes are cheaper, faster to manufacture, and easier to make. Design files can easily be uploaded to a 3D printer and printed. Engineers can then modify designs if necessary and rapidly create multiple iterations of the same part and finalise the best one.

The significant advantages accorded by 3D printing make it an ideal technology for manufacturing prototypes.

3D printing is able to deliver five types of prototypes:

Prototypes have wide-ranging industrial applications. Let's look at a few of those below.

The medical and dental industry frequently makes use of prototypes to improve the speed and reduce the cost of new technologies.

For creating these customised solutions, the company uses a range of prototypes at various stages of production. If they rely on traditional prototyping processes, they may either delay almost all of their projects or spend more than their project budget.

To solve this conundrum, the company now makes use of 3D printing to save on costs and prototyping time. They 3D print every part with cheaper plastic parts, test it, fine-tune it to customer requirements, redesign it if needed, and then send it for manufacturing.

Architecture is also a sector that has many applications for rapid prototyping.

Take the case of Hassell Studio, a multidisciplinary architecture, design, and urban planning studio with offices in nine countries, which prepared a design for a Mars Habitat as a part of NASA’s 3D-Printed Habitat Challenge.

Hassell relied upon 3D printing to create the physical model of the design, earning them a place in the top ten designs of the competition.

The automotive sector is at the forefront of using 3D printing technology and rapid prototyping comes naturally to all automakers.

In 2020, Porsche unveiled a new concept of a unique lattice structured seat for one of its sports cars. This seat would come in three variants; hard, medium, and soft, and the firmness of the seat can be altered by the lattice structure. So, the part is quite complicated.

To test these seats, the Porsche team decided to 3D print around 40 prototypes. These were tested on European race tracks to collect user feedback to ultimately develop those seats for street-legal models. The seats were launched in late 2021.

Rapid prototyping is used in a wide range of consumer goods and electronic devices. It has quickly become the norm and a necessity to help a brand create user-friendly products.

The shoe makes use of a lattice structure to create personalised variations of the shoe with diverse qualities of the midsole. This unique structure can increase the shoe’s performance for a variety of sports, which is one of the primary benefits of employing 3D printing in this manner.

Spare parts management has always been a challenge for OEMs, yet it still is not completely resolved. The challenges range from storage space requirements to heavy logistics costs and overproduction and waste caused by minimum purchase volumes. Long wait times are prevalent.

Companies like Daimler Buses are taking advantage of the unique solutions offered by additive manufacturing. Daimler Buses and its service brand OMNIplus use 3D-printed spare parts to react to individual customer requests and deliver parts in a fast, flexible, cost-effective, and environmentally friendly manner.

This ensures that Daimler Buses’ vehicles are always running and never out of service.

Start rapid prototyping with the I500: The Professional 3D Printer

If you are convinced about the importance of rapid prototyping, especially with 3D printers, then you need to consider the Zmorph i500 3D printer for rapid prototyping. The i500 is a complete professional 3D printing solution and can deliver all types of prototypes with significant ease.

We present you the i500 as a solution for rapid prototyping given its excellent features:

The high-performance i500 3D printer boasts a class-leading build volume of 460x300x500 mm. This allows you to print massive parts in a single piece instead of separate smaller parts or even print multiple parts on a single build plate.

The i500 gives you the opportunity to create large jigs and fixtures, electronic enclosures, and other tools.

The ZMorph i500 has an advanced full metal dual drive extruder that can be heated up to 300°C. Dual nozzles mean extra flexibility to print parts with support material, print parts in dual colours, or print multiple parts at once.

Its unique Nozzle Lifting System is made to ensure the currently idle nozzle will not interfere in any way with the model.

ZMorph offers a wide range of affordable and cost-efficient filaments designed to print perfectly. When used with the i500, these materials can result in the best possible output for all designs.

3D Printing vs Traditional Manufacturing: A side by side comparison of 10 key factors

Your email address will not be published.